Jerry “Hawk” Blocker was a world renowned Native American artist and writer.  Jerry Blocker created a series of Native American drawings featuring various tribal members.  He created a series of Kachina Dolls made from a combination of silver and gold leaves which he coined “The Blocker Leaf.”  His silver Kachina Dolls received one of the highest appraised values for any silver work from the Bowers Museum.  Jerry was featured in several newspapers and magazines.  He toured Asia, Europe and several parts of the USA and sold out most of his work on tour.

Jerry Blocker was a military brat growing up at a US Army base in Germany.  He later moved to Southern California and started a family.  Late one evening in Pomona, California, where he lived, there was a knock on his door.  One of his step-daughters answered and there were some young men asking to speak with Jerry.  When Jerry came to the door the young men all pointed pistols at him and continued to fire shots at him until he fell to the ground.  They took off and left him for dead.  Jerry was hit 7 times in vital areas of his body.  One bullet had hit his spine and paralyzed him from the neck down.  He was rushed to the hospital’s emergency room and placed in critical condition.  Through a miracle, he survived but for the next several years Jerry would need extensive and expensive surgeries.  For years Jerry Blocker was bitter and addicted to the heavy drugs to counter the physical pain.

Jerry decided one day that enough was enough and he wouldn’t continue to feel sorry for himself.  He began training his body to move more and eventually regained some mobility in his shoulders and arms.  He taught himself how to draw and sculpt using his teeth and his wrists.  Several more years passed as he improved his techniques and skills.  Jerry’s marriage eventually ended and he later moved to Nevada.  Jerry got his falcon license and exotic animal license and began to buy and train various animals along with his girlfriend, Ginger Licot.  They raised and worked with animals on their private land. They owned several animals and birds including lions, tigers, lynx, wolves, buffalo, eagles, owls, hawks, parrots and other exotics.  After a few years Jerry moved to Northern California and started with a new set of exotic animals.  Eventually he gave up the animals and the drawings and focused on his silversmith and goldsmith work, as well as writing Native American short stories.

Eventually the years of surgeries and injuries caught up with Jerry and he passed away in 2009 in Southern, California.  His stepdaughters and son remember him as being a survivor.  He rests now in Heaven with no more pain but he touched many lives along the way and inspired many Natives and non-Natives to never give up. 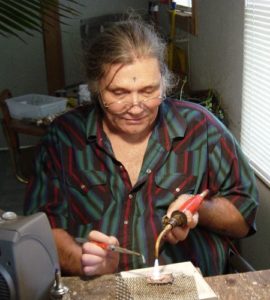 The Day My people died

Mother Earth was covered with innocence like blankets covering her people, missing no one. It was a time when the world itself was at peace, people still had their innocence, and they lived together in harmony, while looking toward the future with great hopes and expectations. It was a time of meditation and being one with the earth, honoring the abundance that mother earth had provided for them. When the night was cold and the moon turned black, a fog covered the land like a blanket. It was the kind of night when one stayed in their hut and curled up with the one they love to sleep the night through with no worries.

Without knowing it, across the river from them lived a tribe with their hearts black, cold, unforgiving, and full of hatred and greed for power, with the desire to own more and more land.

Once, long ago, there were people called the human race. They were warriors of a great Hunter Clan. They controlled a great territory. For many years, great storms ravaged their village. Times were very hard, but the people adjusted to the hardships. Although many times their village was destroyed from the storms, they always rebuilt.

One day a young warrior was out setting traps for rabbit to help his village with food. After all day of setting traps, he began to start checking them. He came upon one of the traps and saw that an eagle had somehow managed to get caught. The great bird’s wing was injured. The young warrior was very sad about the injury he had caused this great bird. His people believed that the eagle possessed great powers. He know the eagle had to be very young and inexperienced in order to be caught in the trap. The young warrior decided to help the eagle by taking him to the village in order to get the medicine man to help fix his wing. The people of the tribe brought their best furs for the bird on which to lie upon. They used their best medicines to treat the bird’s broken wing. All the tribe watched over him and took care of all his needs. They treated him as if he were the chief of a great tribe.

the Cost of Fear

Many years ago, before the Europeans discovered the land, there were many different Indian tribes traveling throughout the country. Most of them would travel to different areas in the wintertime. Then, come summertime, they would move their camp to another area in order not to deplete the food supply, and to give the land time to heal. This summer, the Pawnee tribe moved to Snake River in the valley to spend the summer fishing and hunting, providing food for the tribe. The Modoc tribe also was spending their summer across from the same river. The tribes had an understanding, or an uneasy peace, where they would each stay on their own side of the river and not cross over. This way, war would not break out if they honored this agreement. The Pawnee tribe was a small tribe. They were known all over the land as a tribe with great hunters who were always able to supply their people with enough food. The other tribe across the river was always jealous of them and worried that the Pawnee would kill most of the animals, leaving very little game for them.